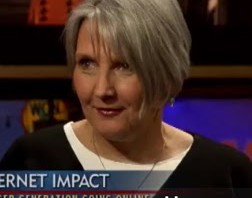 Multiplying the dangers of Covid 19 is the viral misinformation infecting our news cycles. Today it is clear that our physical and mental health, and quality of information, are deeply interrelated. This crisis could be a tipping point where the harm of  viral misinformation is finally becoming visible to the public.

Having left business journalism in the 90’s to go into Chicago city government and later into mission-based community engagement, and development, I wasn’t sure that journalists were constitutionally suitable for the non-profit world.

This was heavy on my mind having been laid off by the Sun-Times in 2008. For years, I had worked with web entrepreneurs and mission -based businesses and non-profits to build the social good web. My background in journalism and the web seemed a perfect fit for the crusade to save journalism.

Program-related investments
When I learned about the L3C — an investment vehicle that encourages foundations to make program-related investments in mission-based businesses — I connected the dots between news and mission and saw a cause I could fully support.  I plugged into a colleague who ran HuffPost Chicago and he gave me a column, which was at the time a more scarce platform.

I started to write about the L3C Newsroom and began regularly delivering information about this idea and other emerging ideas  to foundation executives and others in the digital newsroom space. Ten years later, I have a backlog of information on the forward direction of newsrooms in the digital age.

During this time, I  also consulted with clients such as the  Better Government Association, when its new executive director was reframing the watchdog organization’s mission and structure. Understanding the vast news and information deserts in Chicago — from my time working in newsrooms and  in Chicago city government — I took on  multimedia consulting and project management  with LISC Chicago, bringing neighborhood voices into the mix through a series of  mobile neighborhood tours. As a community service, I produced a companion  Twitter feed and Facebook page.  Other clients from those years include the Chicago Tribune, the BlockbyBlockCommunityNewsNetwork  and Knight Digital Media Center.

Chicago’s independent news ecosystem
I carved out a small but passionate niche.  My most recent effort was a research project I did for the Chicago Community Trust on the Chicago Independent News ecosystem. Take a look, please.

Meanwhile, I am delighted to be teaching Business Communications at the University of Illinois Chicago and I hope to teach more courses in the future.

I am currently rebooting my consulting practice work after a leave of absence due to family matters and I look forward to continuing my work in the field of digital newsrooms.

Light will follow the darkness
Tracy Baim, Publisher, of the Chicago Reader, has taken the lead on the newsroom sustainability front here in Chicago and has gained the support of  The McCormick Foundation, Driehaus Foundation, Chicago Community Trust, Field Foundation, Polk Brothers Foundation and the  Democracy Fund, to support for the Chicago Independent Media Alliance (CIMA). I have been happy to attend a few of their meetings.

Solutions will emerge from this current darkness, and among them will be new ideas for slowing the pace of viral misinformation and creating sustainability for our mission-based newsrooms.  I look forward to being part of those solutions.

Broadcast
I discuss the future of newspapers in 2009 with Elizabeth Brackett, Howard Owen and Geoff Dougherty on WTTW Chicago Tonight.

Chicago Community Showcase for LISC Chicago.
This playlist is a series of audio slide shows I produced with community leaders to be delivered through an early Smartphone app. It is the core content of the Chicago Community Showcase YouTube and Facebook channels and continues as the ChiNeighbors  twitter feed, which I still run as a community service.

A video I recorded in 2010 on the idea of an L3C Newsroom, similar to the idea of a crowdfunded newsroom with a community foundation leading the way for smaller family foundations to provide core investments for local independent newsrooms.